AECT In the 20th Century: A Brief History

Association for Educational Communications and Technology

The Premier International Community for Effective Teaching and Learning

Learn More
‹ ›
The story of the Association for Educational Communications and Technology (AECT) is about a small band of educators passionate about finding better ways to help people learn and how they were eventually joined by tens of thousands of others in pursuit of that quest. What began in 1923 as the National Education Association’s Department of Visual Instruction became an international association representing professionals in a broad range of occupations who have an interest in improving learning through the use of media and technology. AECT is the oldest professional home for this field of interest and has continuously maintained a central position in its field, promoting high standards, both in scholarship and in practice.

The association's history can be seen in terms of six periods: 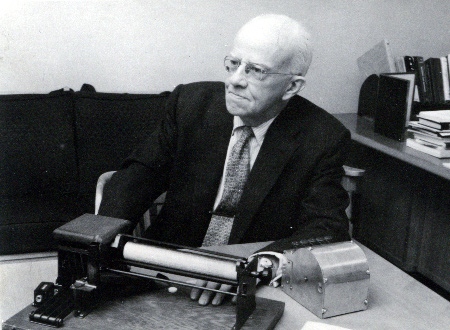 The National Education Association (NEA) establishes the Division of Visual Instruction (DVI) in 1923 as school administrators become interested in the use of new media, such as slides and motion pictures, to improve instruction. The membership is in the hundreds, mainly school people eager to liberate instruction from the bonds of "verbalism.” They rally under the banner of "visual instruction.” [For more ...] 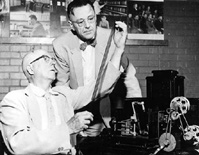 DVI merges with two other visual instruction associations to form an enduring association. The visual instruction movement is spreading to higher education, especially university extension divisions. Activity centers on educating pre-service and in-service teachers to integrate the new media into their instruction. Universities begin to establish audio-visual centers, including centralized collections of media such as slides and films. Economic restrictions of World War II curtail conferences, so DVI is dormant during the war. [For more ...]

The end of World War II brought back home to civilian service a large cadre of specialists in audio-visual training techniques. The returned to schools and colleges that were expanding rapidly and hoping to incorporate the new media into their teaching. DVI became the Department of Audio-Visual Instruction (DAVI) and gained a permanent staff at NEA headquarters. The association began its own separate convention and its own journals (Audio-Visual Communication Review and Audio-Visual Instruction). With the addition of a permanent staff in Washington DC, the association adopted a committee structure that allowed it to carry on professional activities year-round, not just at the annual convention. [For more ...]

The surprise launch of the Sputnik satellite by the Soviet Union precipitated a major federal effort in the U.S. to improve the teaching of math, science, and foreign languages. Part of this effort included equipping schools and colleges with more modern instructional equipment and materials, again boosting the need for audiovisual specialists. Television and teaching machines added additional tools to the professional toolbox. DAVI membership grew from 3000 to 11,000. The convention, the national staff (led by Anna L. Hyer), and the publication program also grew in proportion. [For more ...]

After a major reorganization in 1969-70, the association had a new name, Association for Educational Communications and Technology (AECT), a new "division” structure, and a new executive director, Howard Hitchens. All of this reflected a gradual paradigm shift from an audiovisual orientation to a systems approach orientation. The journals were renamed Educational Communication and Technology Journal and Instructional Innovator, and a new journal was added, Journal of Instructional Development. The 1977 definitional statement now characterized educational technology as a systematic problem-solving process. Later in this period the core constituency—audiovisual directors—began to decline, particularly in the school sector, where the job became combined with that of the school librarian. This led to a change in leadership (Lyn Gubser as executive director) and reorganization to reflect a decline in the traditional membership. [For more ...]

The personal computer era began in 1982, signaling another paradigm shift, from analog media to digital media. As digital media came to predominate, audiovisual services were marginalized and film and video libraries shrank. More members now came from the higher education sector than the school sector. Commercial exhibitors at the convention, which once reached over 300, dwindled to a few dozen. In a reorganization in 1986 Stanley Zenor became the executive director, bringing an era of tighter fiscal management. AECT’s 1994 definition of instructional technology illustrated the continuing shift toward a "process” focus by placing the instructional design process at the center. AECT adapted to the changing times by reaching out to instructional designers and instructional computing specialists. In 1999 AECT headquarters moved to Bloomington, Indiana and Philip Harris became executive director. So, at the end of the 20th century AECT was considerably changed from its original composition of school administrators and school visual instruction coordinators. What remained constant through the years was the mission—helping people learn more efficiently and effectively through the use of the best technologies available at the time. [For more ...]

Sources Consulted to Construct This History

Lembo, Diane L. 1970. A History of the Growth and Development of the DAVI/NEA from 1923 to 1968. Unpublished doctoral dissertation. New York: New York University.

Seels, Barbara B. and Richey, Rita C. 1994. Instructional Technology: The Definition and Domains of the Field.